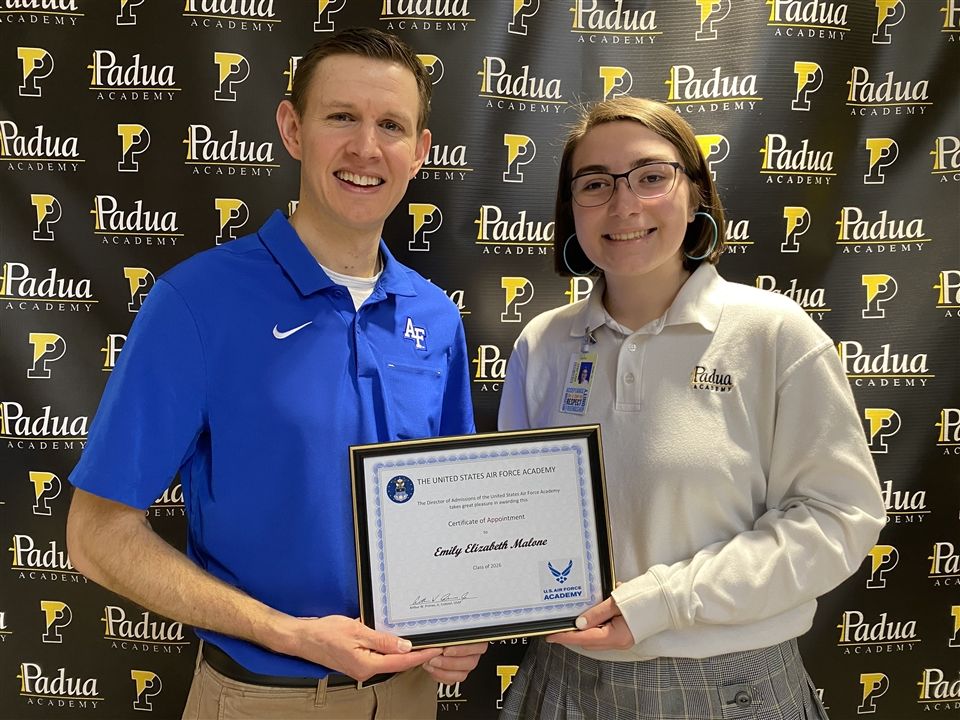 4/7/2022
On Tuesday, April 5, students, faculty and staff, and members of Senior Emily Malone's family gathered in the Learning Commons to celebrate Emily's appointment to the United States Air Force Academy. The application process started in February of 2021 and while it's been a long road, Emily has navigated it with exact precision and her hard work has been rewarded.

For those who are unfamiliar with this process, this is no ordinary college acceptance.  To earn an appointment to the Academy, a student must be “triple qualified” – meaning, they must:
Every one of these three qualifications must be met in order to earn an official Appointment. Being accepted to the school was the result of Emily’s outstanding schoolwork and commitment to her education, including recently being named a Valedictorian for this year’s senior class for having earned the highest quality point average over her four years at Padua.  She passed her Candidate Fitness Assessment, which includes a timed mile run, a basketball throw for distance, pull-ups, a shuttle run, timed pushups and sit-ups.

Most students hope for just one nomination to one academy.  Emily earned multiple nominations to each of the three academies mentioned. In addition, just a few days ago, Emily was notified that she was awarded a four-year, Reserve Officer Training Corps scholarship or ROTC scholarship that would cover the full cost of attendance at a public university of her choice.

And while Emily’s success has been simply remarkable, it has been well earned. Mr. Lang and Mrs. Vintigni both shared remarks on this wonderful Panda and her time at Padua. Then Lieutenant Colonel Aaron Granger of the United States Air Force, Admissions Liaison Officer for the United States Air Force Academy, was on-hand to present Emily with her official appointment certificate.
Congratulations Emily, on the honor you have bestowed upon yourself, your family and our school!  We are so #PaduaPROUD of you! Now it's time to reach new heights in Colorado!
Back