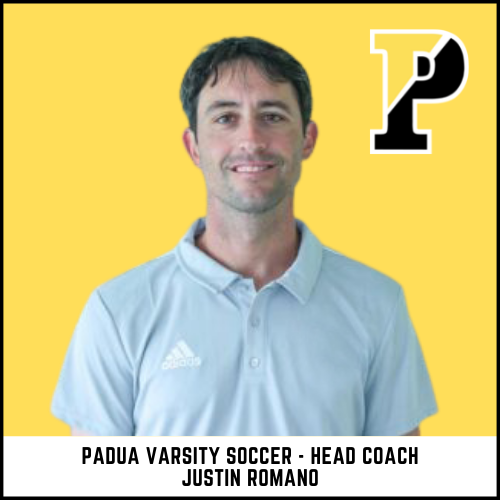 Padua Academy Welcomes a Neighbor to the Pitch

9/3/2021
On August 20, Padua Academy Athletic Director Lauren DiSabatino announced that current Salesianum School Guidance Counselor and Assistant Varsity Soccer Coach Justin Romano will lead the reigning state champion Pandas onto the pitch as Padua Head Soccer Coach for the 2021-2022 DIAA Soccer season.
Padua Soccer is the winningest program in Delaware state history with 11 Division One Championship titles, as well as being frequently recognized on the national stage by the United Soccer Coaches Association and Gatorade, to name a few.
DiSabatino said she’s “excited to welcome Coach Romano to our Soccer Team and school. His wealth of knowledge for the sport of soccer will only continue to enhance the success of our soccer program, while his background in school counseling will be of great service to our young athletes as they transition into high school and after four years, into college."
Coach Romano is equally as excited to join the winning Padua athletics program. When asked what made him choose Padua as a coaching destination, he answered that “Padua is the most prestigious secondary school soccer program in the state of Delaware. So any high level coach would jump at the opportunity to coach here.” And he already has big plans for Padua’s soccer players.
“As a perennial power in the state of Delaware with some of the state’s best players, we are going to do things that other programs in Delaware don’t do such as wear GPS monitors and travel out of state for games against better competition. Soccer is a game that should be fun and teach the young women life lessons.”
When asked to recall a memorable experience in the sport, Coach Romano said he’s had “a lot of awesome moments as a coach with it being really hard to pick just one.” But “at Salesianum, in 2013 ,we beat St. Benedicts who was ranked #1 in the country and had won something like 65 straight games. We beat them at their place in overtime. Just being in that environment, as a high school coach/player, isn’t something that many get to experience.”
Coach Romano holds a Masters of Science in School Counseling Wilmington University, a Bachelor of Science in Health, Nutrition, and Exercise Science from the University of Delaware and a USSF National “A” Coaching license. He has been assistant coach at Salesianum for 11-years, winning 10 state championships. The program has been ranked nationally for many of those years including #2 in the country in 2013. Coach Romano is also the current zone 1 and Technical Director of Delaware FC soccer club.
Padua won their 11th DIAA State Title during the Spring of 2021 after an entire playing season was cancelled due to the Covid-19 Pandemic.
Back