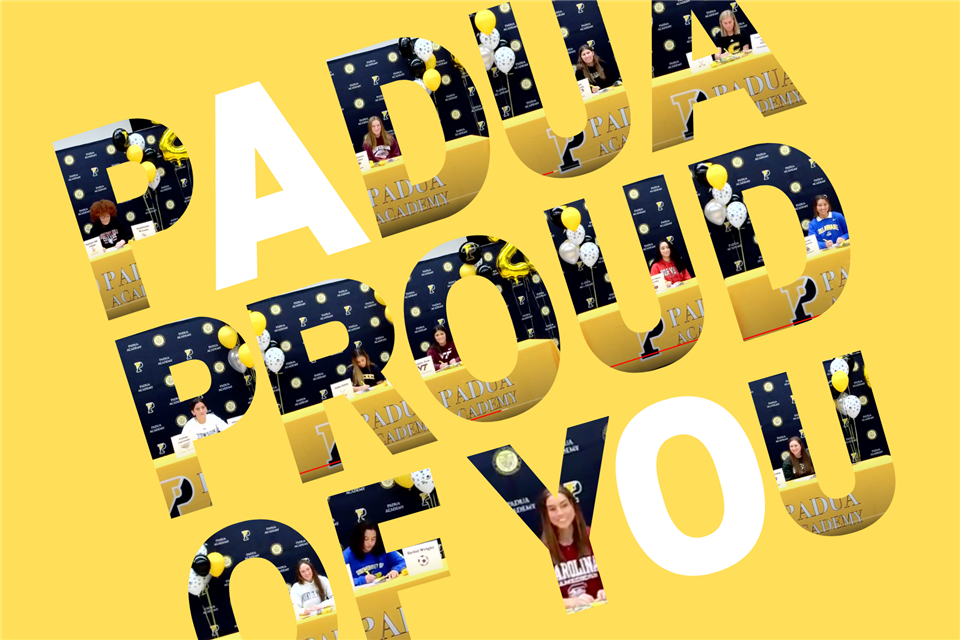 2/4/2021
Join us in congratulating the following 13 Padua student athletes who participated in a college sports signing ceremony on Thursday, February 4. Using the Cafetorium, we were able to personally recognize each Panda with their very own signing ceremony as their fellow signees and parents watched on during this socially distanced event.
Usually we fill the gym with family and teammates as senior athletes all sign at the same time. So it was really nice being able to spotlight each of them individually, talking about their involvement in athletics, activities and clubs while at Padua, where they'll be attending college and what some have chosen as their majors.
This year's signing also represents the largest contingency of NCAA Division One schools in recent history!
Relive this wonderful event by watching a replay of the livestream: https://bit.ly/3cJ4SX9

During Audrey’s four years at Padua Academy she has been a part of the Newport Rowing Club and also the Wilmington Youth Rowing Association in 2020-2021.
Some of Audrey’s clubs and volunteering accomplishments include: National Honor Society, Student Leader and member of the Goldfish club and volunteering at Learn to Row summer camps the past 2 years.
Audrey has achieved many awards during her career including:
She plans to major in Biology with a Pre-Veterinary advisory.
Olivia Bocchetti / Towson University XC and Track & Field

Olivia has been competing on Padua’s Indoor Track team since 2017. She is also a 2 year member of Padua’s soccer program and Cross Country team, and 1 year member of our Spring Track and Field program.
Some of Olivia’s athletic accomplishments during her high school career include:
Some of Olivia’s service accomplishments include: volunteering with an international organization called Operation Christmas Child, volunteering at Mary Campbell Center weekly Bingo night and the Emmanuel Dining Room. Olivia is also a caretaker for the Guardian Angels Childcare.
She has decided to go undeclared next year.
Anna Getty / Drexel University - Field Hockey
Anna has been a dual athlete at Padua for the past four years on our Field Hockey and Soccer programs. Anna was a Varsity member of the 2017 & 2018 Delaware State Championship Soccer team and back to back championship appearances for Field Hockey in 2018 & 2019.
Some of Anna’s career accomplishments include:
Some of Anna’s Club and Service Accomplishments are: Student Council, Blue Gold, and HOSA. She also plays for the Delaware Sharks Field Hockey Club and Delaware Rush Soccer Club.
She has decided to major in Chemical Engineering.
Brieana Hallo / Delaware State University - Soccer

Brieana has been a member of the Padua’s Soccer program for the past 4 years. Briena was an intrical part of the consecutive State Championships in 2018 and 2019.
Brieana currently plays for the Dominican Republic U-20 women’s soccer team. She has been with this team for the past 3 years competing on the U-15 & U-17 team as well. Brieana’s team played in the Pre-Olympic Qualifiers and the World Cup Qualifiers as the youngest team in the tournament.
Throughout Brieana’s four years in high school she has also played on the Delaware Union’s club team, Coastal Atlantic FC club team, and Sporting Delaware Girls Academy Team.

She plans to major in Biology.
Erin Kelleher / Virginia Tech University - Track & Field/ Pole Vault
Erin has been a part of Padua’s Indoor and Spring Track and Field program for the past 4 years. Erin has been a 5 time 1st Team All State award recipient, along with winning 5 State Championships for both Indoor and Spring Track and Field combined.
Some more of Erin’s athletic accomplishments include:
Erin’s service and volunteer accomplishments include:
She plans to major in Human Nutrition, Foods, and Exercise.
Mackenzie Sobczyk / University of Delaware to compete - Volleyball

Mackenzie is a 4 year member of Padua Academy’s Volleyball program. She has also participated in Spring Track and Field for 4 years, along with Indoor Track for 3 years. Mackenzie was part of the State Championship Spring Track and Field team both freshman and sophomore year, the Indoor Track State Championship her sophomore year and the Volleyball team State Championship her Junior year.
Some of Mackenzie’s volleyball accomplishments at Padua include:
During Mackenzie’s four years at Padua, the volleyball team has been to the final four all 4 years. Finishing 2nd place her freshman year, 3rd place her sophomore year, winning the State Championship her junior year, and 2nd place her senior year.
Some other awards include:
She plans to major in Nursing.
Meghan Speicher / Mount St. Mary’s University - Swimming
Meghan has been a member of Padua’s swim team for the past 4 years. Receiving many awards during her career starting from freshman year named Honorable Mention All State, sophomore year named 2nd team All State along with the Panda Leadership Award, and her junior year being named 2nd team All State & Delaware Winter Athlete of the week.
Some of Meghan’s swimming finals standings include:
Meghan currently holds records for her summer swim league and club team. Along with being awarded on her club team with a leadership award her sophomore year. Padua’s team also awarded Meghan with the Panda Leadership Award her sophomore year.
Some of Meghan’s club and service accomplishments include: National Honor Society, Blue Gold, Peer Leadership Team, Make a Wish Club, Ronald’s Rescue, and volunteering at Elite Physical Therapy.
She plans to major in Health Science.
Sydni Wright / University of Delaware - Soccer

Sydni has been a member of the Padua’s Soccer program for the past 4 years. She was an intrical part of the consecutive State Championships in 2018 and 2019.
Sydni was named All- Catholic Conference her freshman year and 1st Team All-State her sophomore year. She was also ranked by the Delaware High School Girls Soccer Coaches Association as the #7 player in the state her junior year. She also currently plays club soccer for Penn Fusion Academy and has been a member of that team since 2015.
She plans to major in Computer Science.
Grace Zamrowski / University of South Carolina - Track and Field
Grace has been a member of  Padua’s Track and Field program for 3 years, as well as competing in Cross Country during her senior season.
Some of Grace’s track and field  accomplishments include:
Grace was also a part of the Garnet Valley High School Indoor and Spring Track and Field program during her high school career and she participated in the Whirlwinds AAU Track Club Team.
She plans to major in Exercise Science.
Division II Athletes
Anastasia Watson / Chestnut Hill College - Track and Field